Meghan Agosta has been a member of the Canadian Women’s National Hockey Team since 2004. She has played in four Olympic Winter Games, winning gold in Turin 2006, Vancouver 2010, Sochi 2014 and recently winning a silver medal in Pyongchang, South Korea. With nine goals and six assists, she was the top scorer at the 2010 Olympic Winter Games and was voted Most Valuable Player and Best Forward as well as being named to the Media All-Star Team. Agosta has also been a part of eight world championship teams, winning gold in 2007 and 2012 to go with six silver medals.

After Sochi 2014, Agosta took a break from hockey to focus on her career in Law Enforcement. After attending the Police Academy, Agosta is now a full time police constable with the Vancouver Police Department. She returned to the National Team program in the fall of 2015, competing at the World Championships in 2016 and 2017. While playing for the Montreal Stars of the Canadian Women’s Hockey League in 2012-13, Agosta became the first player to win the Angela James Bowl in back-to-back seasons as the CWHL’s leading scorer. In 2011-12 she had set the CWHL’s single season scoring record.

Collegiately, Agosta had played for Mercyhurst University where she was named four times as a finalist for the Patty Kazmaier Award as the top women’s NCAA player. Without a CWHL team in Vancouver, Agosta keeps her skills sharp by practicing with a local Midget AAA team (Valley West Hawks), plays for the Vancouver Police hockey team (Centurions), plays on an over 30 team (Devils) and works with a skills coach out of UBC (Mike Sommers).

A little more about Meghan 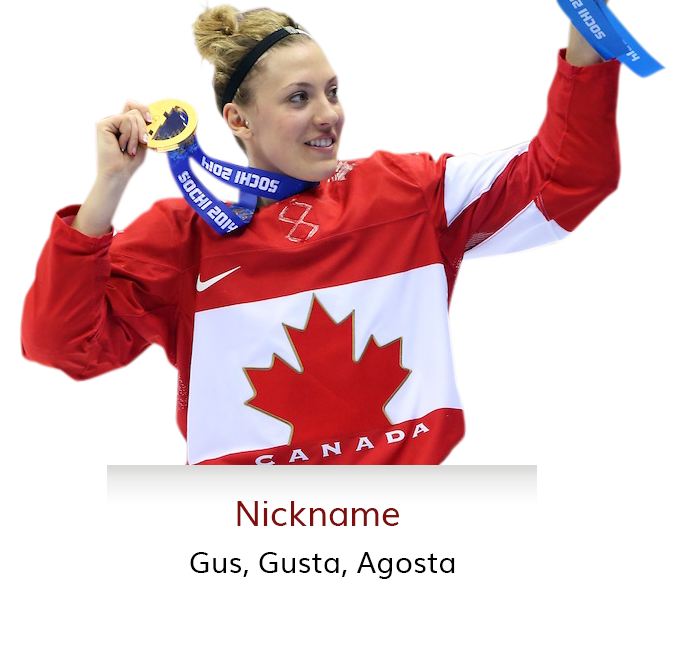 GETTING INTO THE SPORT

Meghan was inspired to play hockey because of her older brother Jeric who was a good hockey player. Her older sister was a figure skater so her parents put her in that sport first, but she was more interested in playing with a stick and ball on the neighbourhood streets. At age six, after a year of begging, her parents relented and registered her in hockey. In her first game, she scored 19 of her team’s 21 goals and was immediately moved up a level. She played with boys until peewee minor AAA because girl’s hockey was just in its infancy at that time.

“Somewhere behind the athlete you’ve become and the hours of practice and the coaches who have pushed you is a little girl who fell in love with the game and never looked back. Play for her.”

Agosta’s favourite animal is a dog. She has a yellow lab named Rocky.

Always puts on the left side of her equipment before her right.

Growing up she admired Steve Yzerman and Cassie Campbell, who she says is the best captain she’s ever had. 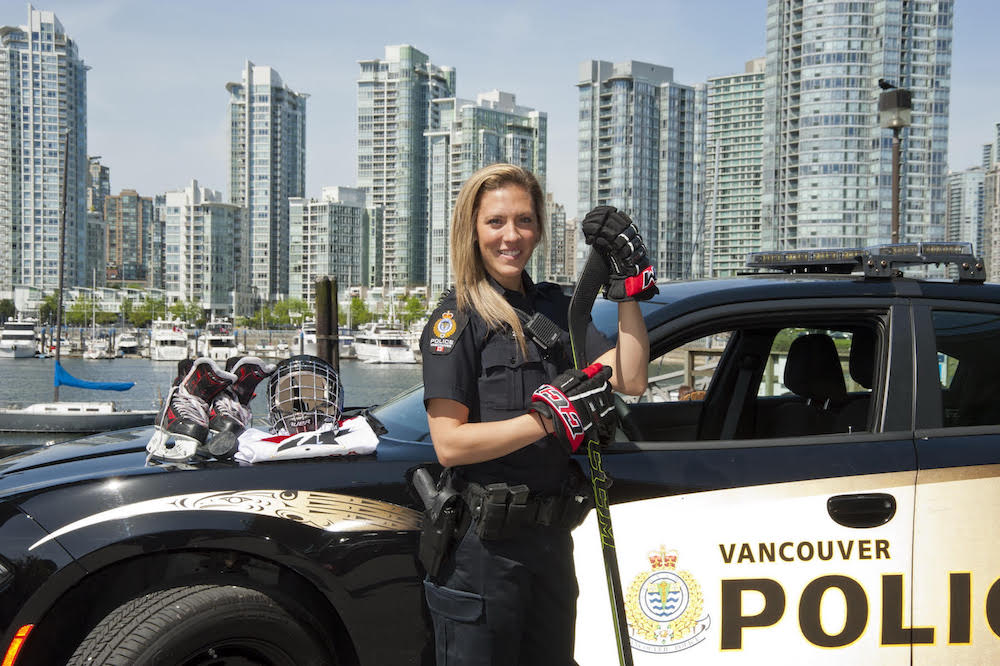 Graduated from Mercyhurst University in 2011 with a major in Criminal Justice and a minor in Criminalistics Psychology.

YEAR LEAVE OF ABSENCE FROM VPD

Meghan took a leave of absence with the Vancouver Police, to be centralized with the National Women’s Team in 2017-18. This allowed Agosta to train on a regular basis with her teammates to prepare for the 2018 Winter Olympics in Pyongchang, South Korea. Agosta will start work again in May 2018. 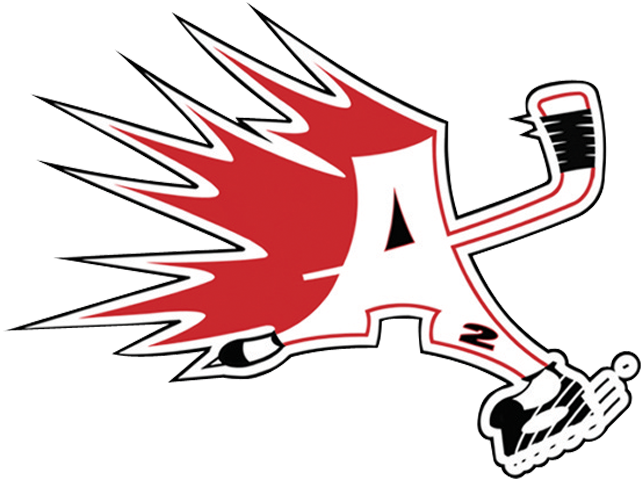 Meghan has her own hockey camp, Agosta’s High Performance Hockey Academy. Her hockey school has taken place in Windsor/Essex County in Ontario and in time she will expand to Vancouver, BC.

The Meghan Agosta Foundation was created to provide an opportunity to play hockey for young children who are interested but are unable to do so due to financial reasons. The foundation provides the necessary funds to allow these kids to play the game they love.

Each year, Meghan will reach out to various associations across Canada to select children who are in need of financial assistance and unable to get involved in hockey. A recipient will be chosen to be sponsored each year and a brief profile of the child will be posted on Meghan’s website.

Meghan is passionate about the sport of hockey and knows the important role it plays in developing a child’s life. This is Meghan’s way of giving back to a sport that has given her so much!

Playing for Canada has always been Meghan’s dream since she was a little girl. As a 3-time Olympic gold medalist and a 1-time silver medalist, her dream has come true. Contact Meghan to speak with your organization about her experiences and her insights into how to become a champion in your field. Teamwork, leadership, goal setting and sacrifice are not only business terms, but are also integral parts of a gold medal hockey team.

Call or email to book Meghan to inspire your team members.